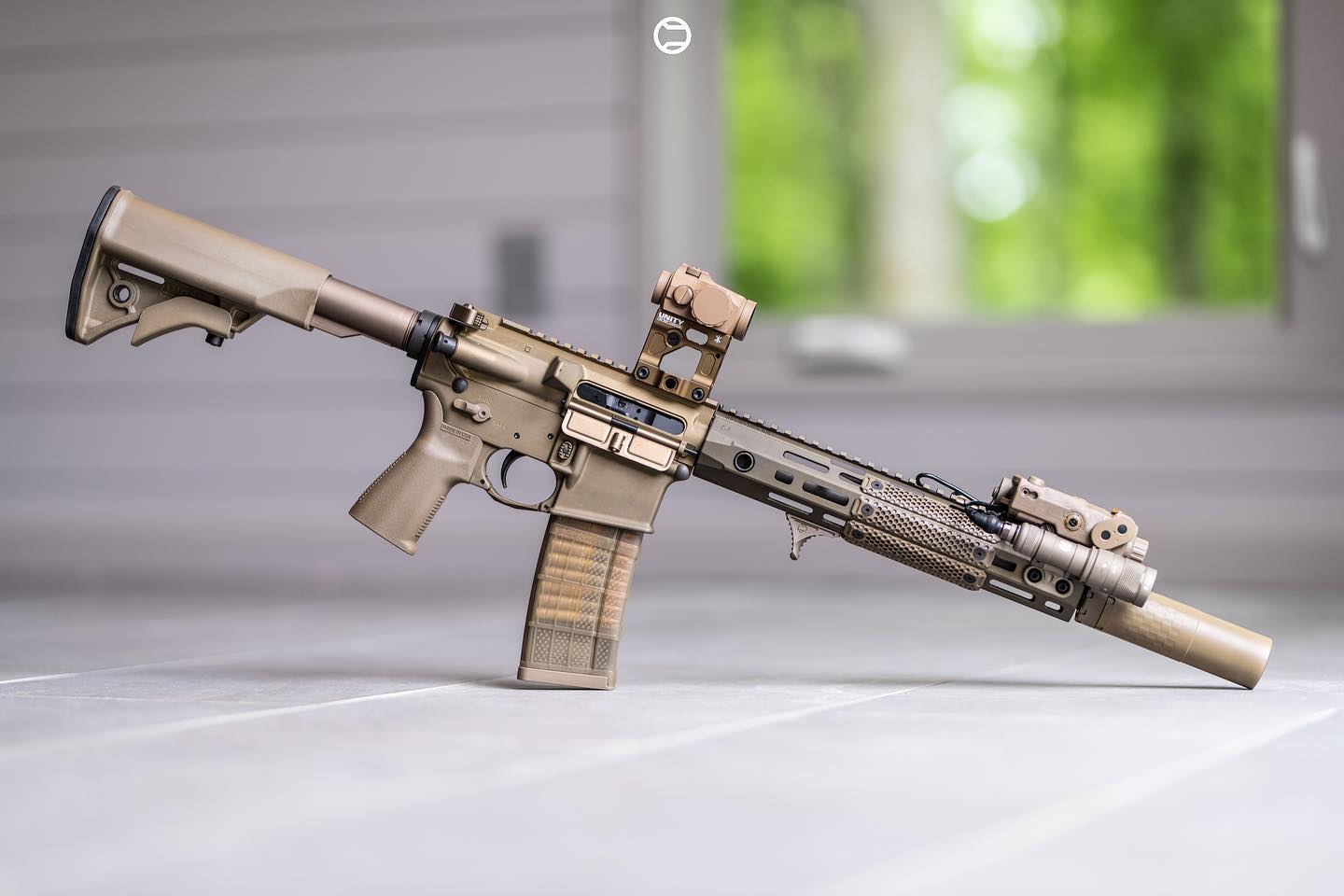 AR-15s are versatile weapons that have endless opportunities for customization. One of the most popular areas to customize, especially for those building a custom AR-15, is the caliber.

RailScales is an AR-15 accessories shop that offers the best AR-15 rail covers, handstops, vertical grips, iron sights, and more. Our team is passionate about helping you enjoy shooting your AR-15, so you'll continue to do so. Below, we'll take a look at some of the many different AR-15 calibers available. Shop our AR-15 accessories online today! 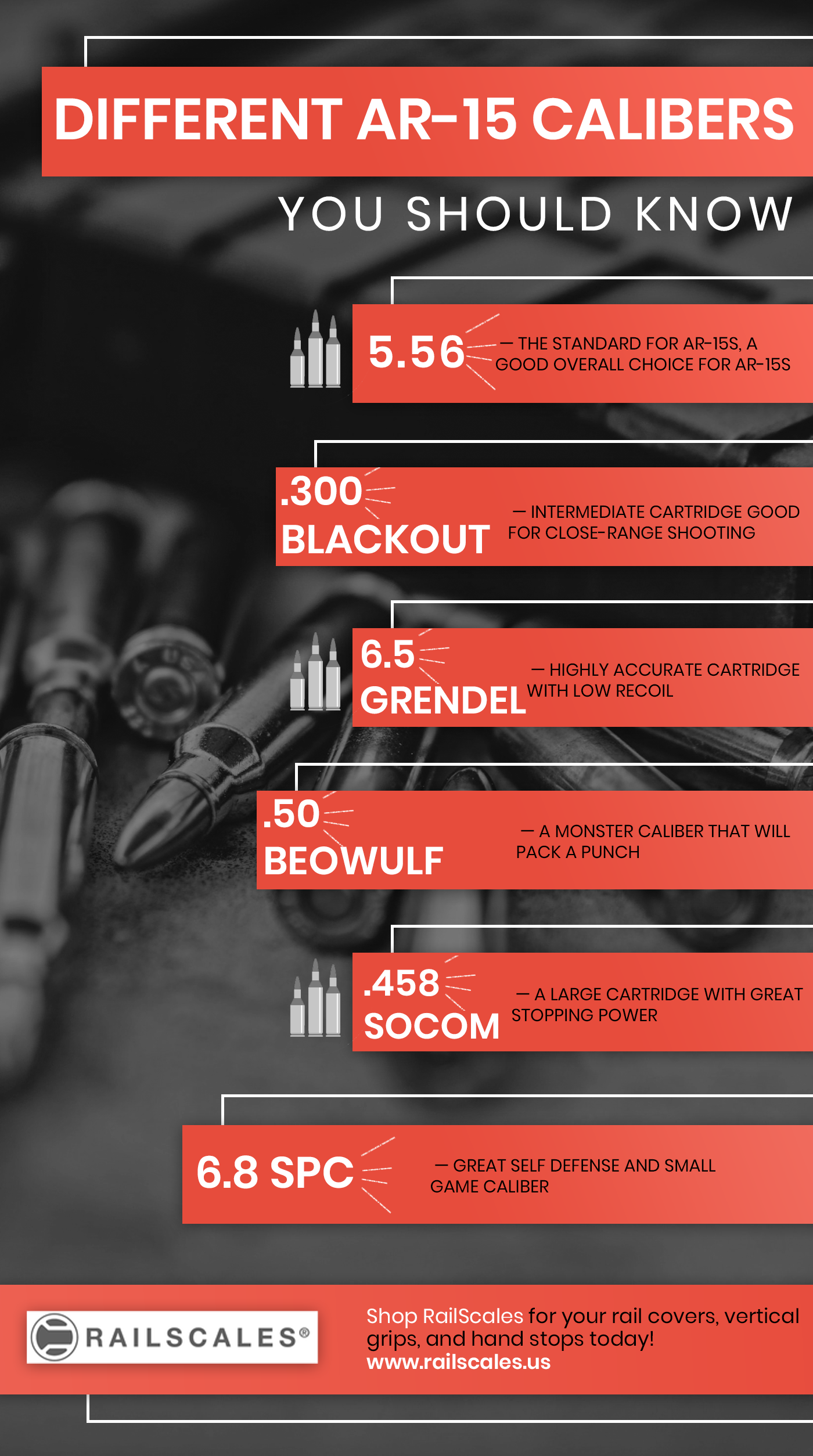 DIFFERENT AR-15 CALIBERS YOU SHOULD KNOW

The 5.56mm round for AR-15s has been the standard for over 60 years. It was developed in the 1960s as the U.S. Military was looking for a more reliable, accurate, and lighter general issue weapon and cartridge. Before this, NATO was looking for a single rifle cartridge that could be adopted for use by all of the allies so that if war happened again, these rounds would be easy to distribute and produce by everyone. At the time the AR-10 was developed into the M16 and then the AR-15 was developed. The U.S. Military adopted the 5.56 as its round of choice, so ARs began to be made with these as well.

The .300 Blackout is also commonly known as the .300 BLK or as the 7.62x35mm. This caliber was designed to be usable on existing AR-15s that were chambered for the 5.56, but could be a heavier, more intermediate cartridge. The goal was to be similar to 7.62x39mm but still be usable in existing AR-15 magazines. This caliber is very accurate and loses very little velocity when fired. However, it can be very expensive and hard to find. Plus, it's not the best for long-range shooting.

Also known as the 6.5x39mm, the 6.5 Grendel is very similar to the .300 Blackout. It was designed to be highly accurate and have a low recoil. This round is shorter than others with a larger diameter case so that it can fit into the 5.56 AR-15 magazines. This caliber is better than the 5.56 with better terminal energy and range. However, it is not always reliable in a 5.56 magazine and won't feed the best. Plus, you may want to switch out your upper receiver for this caliber, but it will still be compatible with a 5.56 lower.

If you know the story of Beowulf, you know that Beowulf was a Danish prince who took on the monster Grendel and Grendel's mother and made the kingdom safe again. Thus, with a name like Beowulf, you should expect great things — and indeed, this caliber delivers. This monster caliber was developed by the same people who developed the 6.5 Grendel. Powerful and great for hunting big game, this caliber is the hardest to come by, and you'll probably have to learn to reload it if you want to ensure a good supply. It goes without saying that this caliber is a great self-defense choice and is great for close-range hunting

Again, the military was involved in the development of this round. The 5.56x45mm NATO round was not getting the job done in terms of stopping power when the U.S. troops were in Somalia. Thus, the .458 SOCOM was developed to be larger and have more stopping power but could still be used in the M4 and M16 rifles. This caliber is fully compatible with the 5.56 AR platform, including the magazines and buffers. However, this round takes up more space in a magazine, resulting in fewer rounds being loaded. For those looking to defend themselves against grizzly bears, this has become the bullet of choice because it can be fired rapidly. However, this caliber is expensive, can be hard to find, and has a limited number of rounds in a magazine as a factor.

The 6.8 SPC or 6.8mm Remington Special Purpose Cartridge, was designed to replace the 5.56. It uses the same diameter as the bullet for a .270 Winchester, and offers twice the ballistics. It is best used at short ranges rather than long ranges. This caliber is also an expensive one and is a great caliber for hunting medium-sized game, such as hogs and small deer at close to moderate range and offers tremendous stopping power. The 6.8 SPC is also a great self defense choice for AR-15s, and this ammo is not too hard to come by

CHOOSE RAILSCALES FOR ALL OF YOUR AR-15 ACCESSORIES TODAY

Upgrading and customizing your AR-15 are two of the funnest activities you can do if you love shooting. Since there are so many choices when it comes to everything AR, you'll want to make sure that what you choose makes sense for your use so you don't end up going down the rabbit hole and spending a lot of money on AR parts you really don't need.

When it comes to caliber, RailScales recommends that you stick to considering power, the availability of your chosen cartridge, and the cost as well. Ammunition can quickly add up, especially if you shoot a lot. However, reloading cartridges is always a viable option as well to keep you in constant supply at an affordable price. Will you be hunting, shooting in competitions, or investing for self-defense?

RailScales offers the best rail covers to make your shooting time comfortable and easy. Our rail covers are made for the MLOK and KeyMod rails. These handguards offer heat protection and superior grip, so you can shoot longer. They are thin and lightweight and take up hardly any noticeable rail space. These tactical grips are easy to install and come in cool colors to match your AR. We also offer handstops and vertical grips, as well as iron sights and sling mounts.

The choice is clear. Choose the best rail covers in the industry from RailScales, and order online today!